Gopher is a species of burrowing rodents that can be classified under pocket gophers and the Richardsons ground squirrel. It is found across North America and is known to dig a large network of tunnels. Imagine having such tunnels right under your lawn or landscape?

Gophers normally eat anything from plant roots to vegetables and shrubs. This food habit will not only destroy your kitchen garden but also cause considerable damage to your plants. The question is how do you tackle this menace?

There are several solutions available to tackle the Gopher menace and these solutions are available in the form of traps. It is of course not easy to find the best gopher trap and hence, we have put together a list for you.

In this Gopher Traps Review, We have listed down the 8 TOP Rated Gopher Traps that available on the market that helps to get rid of gophers from your garden, yard and lawn by trapping and killing gophers immediately after 48 hours of setting the trap.

Remember to buy more traps and set these traps across your garden or lawn to effectively eliminate the Gophers quickly rather buying one of two traps that kills your time and finally you end up in thinking that does gopher traps really work or not?

The black hole gopher trap has been created specifically to catch gophers, rats, and moles. It is easy to set up and works on a specific mechanism. 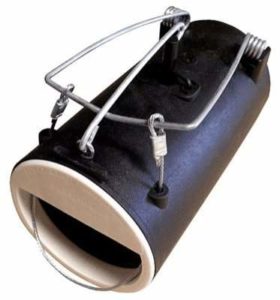 The trap consists of mainly 4 components, which are spring, trigger wire, spring bar, and cable noose. You have to lay the trap on a flat surface and have to be kept in one of the tunnels created by Gophers.

If you want to catch a gopher, you need to also ensure the trap is covered with loose soil so that the spring and cable are not visible. The shape of the trap is round and creates the tunnel effect. At the end of the day, where you place the trap will determine its effectiveness in catching or trapping rats, gophers, and moles.

There are no disadvantages as such of the black hole gopher trap as it is has a simple trap mechanism but sometimes, gophers can end up blocking the trap entrance with dirt.

This will trip the kill wire and you will not be able to catch gophers. Hence, it is recommended to check the trap once in two days, so that you can clean the trap and also check if it is in working condition.

If you have been looking for the simplest trap for gophers then the pincher style Victor gopher trap is just the thing you need. The good news is that it is available in a set of 2 traps and is quite easy to set up. The trap mechanism consists of components like the trigger bar, jaws, trap set, and engage pan. 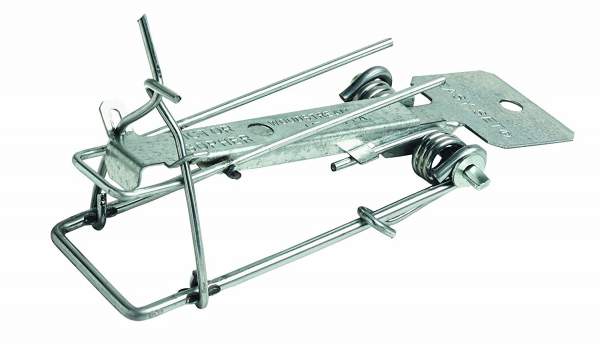 The salient benefit of this super easy trap is that it will help you to effectively kill any gopher that comes close to this trap and all this without having to the use any poison or chemicals.

It is one of the most effective environmentally friendly ways of getting rid of gophers. The body of the Victor gopher trap is made using galvanized steel, which provides durability as well as superior strength.

If you are wondering how to trap a gopher using this device then that’s the easy part. The trap has a narrow design, which makes it easier to insert into tunnels created by gophers. You set the trap and leave it in the tunnel and soon you will find that your garden or landscape is free of these burrowing animals. 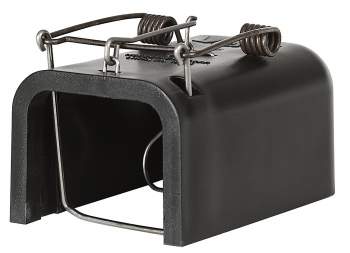 A black box gopher trap as the name sounds is basically a trap that is black in color and can be round or rectangular in shape. This is a gopher trap by Victor that has a mechanism more popularly known as a choker loop-style gopher trap.

The construction of this trap is a nice blend of galvanized steel and plastic and that’s what makes it highly durable and provides it superior strength. This simply means that the trap can work effectively for quite a few seasons.

How to set gopher trap like this? This 6″ long x 3.5″ wide device is easy to use and is quite effective as compared to the conventional wire claw and box trap. The gopher trap comes fully assembled and needs to be placed in any of the gopher tunnels. The spring-triggered loop does the rest!

This gopher trap can be placed in any type of soil and is weatherproof as well.

This is a highly effective cinch gopher trap that packs quite the punch! You get two traps that are simple to operate and highly efficient trapping machines.

What makes this trap a favorite is the fact that it has been time tested by farmers and ranchers for over 100 years. This medium gopher trap kit by Conch contains two traps along with flags and an instructional brochure. 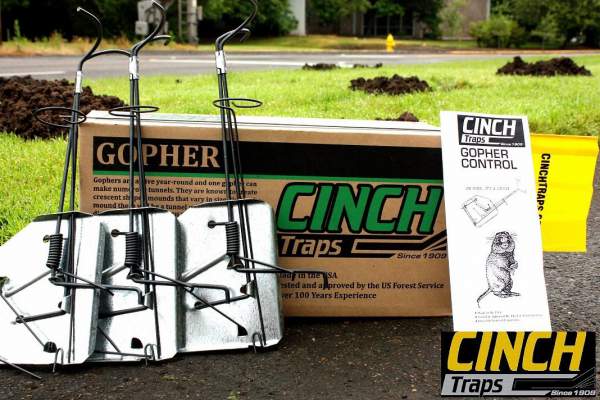 The construction of the gopher trap is quite robust as it is in the form of a galvanized steel plate along with metal wiring. It comes with a trigger towards the cinch end, which works effectively in getting rid of gophers and moles.

Just like any other live gopher trap, you need to place this trap in one of the suspected gopher tunnels. How do you know a gopher is trapped? Simple, the spring arm stretches out in the air every time, the trap goes off.

The cinch gopher trap can be placed in a variety of areas including the garden, lawn area, golf course, farmland, ranches, and other outdoor areas including sports fields.

The Macabee gopher trap MGT is probably one of the easiest to use mechanism available out there. It comes in a simple design and components consist of trigger wire and jaws. It is considered as one of the most reliable traps for gophers out there. 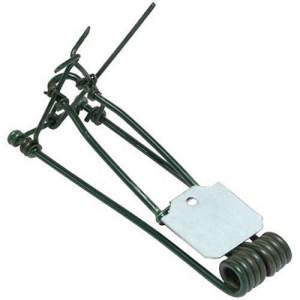 It is made of steel and hence is highly durable but more than that, the manufacturer Macabee offers “lifetime warranty” on the product.

It is considered as one of the most reliable traps for gophers out there. It is made of steel and hence is highly durable but more than that, the manufacturer Macabee offers “lifetime warranty” on the product.

The size of this highly efficient gopher trap is small as it has been created to trap pocket gophers. Essentially this is one of the most reliable pocket gopher traps that you can use in your outdoor space including laws, gardens, and landscape area.

Gophers as a rule burrow and live underground and hence, once the trap has been set, it needs to be placed in one of the tunnels created by the Gophers. Whenever a gopher will pass through the tunnel, it will trip the spring, and get trapped.

The Macabee gopher trap is environment-friendly and since it has to be placed underground, it doesn’t cause any injury to children or pets. It is available in a pack of 24 traps so that you can use them all year round.

The DK-1 live gopher trap also known as the death klutch gopher trap is one of the simplest devices available. You can set it with ease and shove it down the gopher tunnel and you will definitely be surprised with its results. It will definitely help you catch more gophers than you can count. 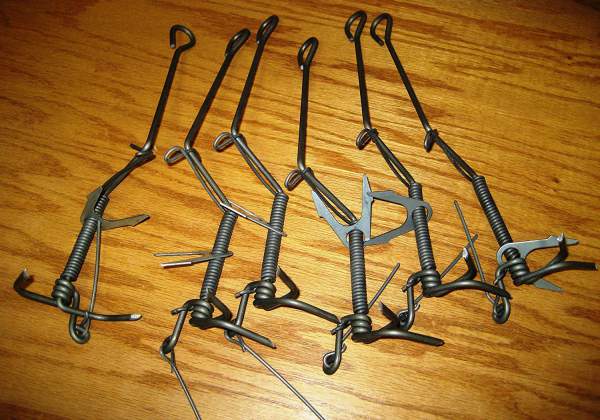 The DK-1 can be categorized as a pocket gopher traps although it also catches moles and striped gophers.

This device is made of highly durable and strong steel wire due to which it can be used for several seasons. It is available in a pack of 6 and each trap can be used multiple times. 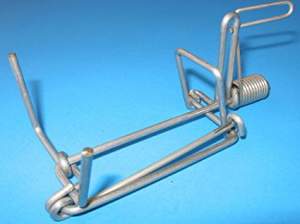 If you are frustrated with the nuisance being created by gophers in your garden area then it is time to get the gophinator gopher trap. What makes the Gophinator highly popular is the fact that it is quite sturdy and can handle re-use several times over.

The trap has been made using high temper stainless steel wire and this provides longevity and high performance to the device as compared to other cheaper traps.

The gophinator gopher trap is available in a pack of 4 traps and will not only help you get rid of gophers but also moles. One of the salient aspects of the gophinator is that the core design has successfully eliminated limitations that exist in other gopher traps, which reduce overall effectiveness of the device.

Due to its design and functionality, it reduces trap shyness in gophers. The one thing the Gophinator has been designed for is to kill the gopher in its first encounter! 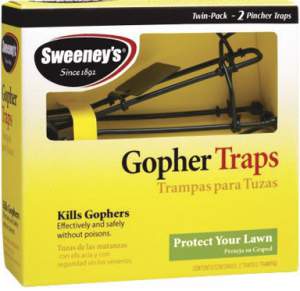 If you have been worried about how to trap a gopher or gophers that roam under the surface of your garden destroying plant root systems then what you need is Sweeney’s Gopher Trap. Gopher control is all about gopher killing because these small burrowing animals can breed rapidly.

It is available in a pack of 4 traps and it doesn’t kill gophers but runs them through and this means that gophers can’t escape. In some of the cheaper traps, incidents of gophers escaping have been reported and once they escape, they can become trap shy. You don’t want that to happen!

The Sweeney’s Gopher Trap comes with superior strength steel construction that makes it highly durable and increases longevity. It has also been powder coated, which provides it with all weather-resistance capability.

This best gopher trap is easy-to-set but you need to place 2 traps 12-18” apart in either direction so that its performance is increased.

These are the best gopher traps that are available in the market and the basic difference lies in their pricing, the mechanism used, and what it can trap. Some traps can get rid of gophers and moles while others are dedicated gopher traps.  It is recommended to go with a trap that will cover your lawn space or garden and fits into your budget.